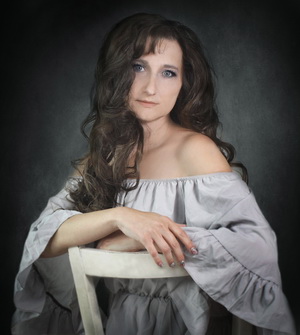 Krisztina Laki, a mother of three children lives in Kaposvar, close to the southern border of Hungary. Like many lovers of photography, Krisztina was creatively inclined from childhood. To satisfy her thirst for creation she took to drawing, experimented with silk painting and created painted glass works.

She discovered the true canvas of her inner creative self relatively recently via the freedom of expression provided by the advent of digital photography. This late found hobby soon blossomed and led Kritsztina further on her path. Her nature and landscape works inspired by the love of interesting places and her macro photography works were amongst the first that she ever presented to the public.

This Hungarian artist successfully competed and won a number of prizes in Hungarian photography competitions from the beginnings of her career. These great results gave her courage and enthusiasm to capitalise on the need for creation in many new areas of photography.

She has documented the blooming of her eldest son Bence; also her most faithful model, since the first moments of his life. Krisztina has been increasingly able to visualise her artistic ideas with the inspiration of Bence. 2011 brought a milestone in her life: her collection of models grew by one girl, her very own daughter. Albeit strong willed, Nora has been surprising the photographer with active participation in her work. In 2015 the arrival of her third child, Barna changed the gender balance once again to the boys and suddenly the future photographs gained a new main character.

The recognised artist today first competed on an international level in 2013 with great success. With her emotional portraits of children, illumination of touching moments and intimate nude compositions, today she has earned recognition more than 1000 times in over 50 countries in the world. Her artistic vision is preserved not only by her images but has been recognised by her profession, having received over a hundred medals and a HM special prize.

Krisztina, after some encouragement from her peers, applied and successfully obtained the AFIAP (Artist FIAP) distinction from the International Fedration of Photographic Art. Amongst her next year plans is obtaining the EFIAP (Excellence FIAP) distinction, for which she already has many qualifying works.

Krisztina’s personal experiences and raw emotions pour honestly into her images; the pain of tragic events in the family and the new found happiness in her children. The tension between these two extremes is presented sometimes at the same time and can be seen in other works in striking isolation. Besides her children, another pillar of the photography is her 92 year old grandmother. In the portraits of this muse, the face of old age is reimagined through Krisztina’s lens. We see the beauty, the power and the vitality of a person tempered by a hard fought life.

Those who live deeply by their hearts can connect with Krisztina’s emotive standpoint and relate to this heartfelt and authentic work. With a multitude of awards and exhibitions behind her, Krisztina still maintains a humble curiosity and openness to learn, create and explore. The love of photography will always accompany her. Meanwhile, many beautiful moments and experiences present themselves to become part of Krisztina’s eloquent photographic repertoire.
Original in Dodho Magazine